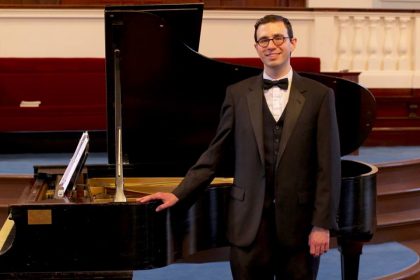 Come celebrate the New Year and your Scottish heritage with New England’s premier tenor, Austin Burns and special guest Allison Flanagan. Settle in for a rollicking night dedicated to Scotland’s beloved poet Robert Burns who first discovered and transcribed the ultimate New Year’s song, “Auld Lang Syne!” Sets will include songs about the beautiful countryside, wild men like Burns himself, some toe tappers, and sweet ballads. The arrangements featured are by Maureen McMullan (professor at Berklee), Arthur Foote, Franz Haydn, and Austin Burns. What is Burns Night? Burns night is an annual tradition celebrated around the world with various events throughout the month of January to celebrate the birth of Robert Burns (January 25). It is a celebration of Scottish heritage where participants are encouraged to read poems by Robert Burns and other authors. The poems are often of a lighter nature and can contain salty language on rather bawdy subjects. The celebrations also include a salute to the haggis (a savory meat pudding) listening to a bagpiper, dressing in kilts, dancing, and of course plenty of drinking. To truly celebrate Burns night I need you to come prepared to have a good time. All are optionally encouraged to wear kilts, tartan colors and dancing shoes!

Austin Burns is a tenor, arranger, and composer known for his themed programs and conversational performance style. His expanding repertoire includes Scottish songs, Irish songs, Neapolitan songs, songs from the Gilded Age, A Three Tenors Tribute Concert, and many more. Austin performs throughout New England at various historic homes and social clubs. Notable performances include concerts at Marble House in Newport R.I., Hamilton House in South Berwick ME., and Eustis House in Milton MA. Austin has also performed at The Harvard Club, The St. Botolph Club, and the Boston Public Library. There will be a freewill offering to defray expenses. For more information, visit www.fplex.org or call 781-862-8200.