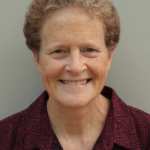 All are welcome to the next Unity Group luncheon and program, which will take place on Monday, February 13th in Parker Hall. This month’s presenter will be Cammy Thomas, who will talk about Emily Dickinson and how her poetry influenced Cammy’s own poetry. Cammy writes:

“Virtually unknown during her lifetime, Amherst native Emily Dickinson (1830-1886), who barely left her house as an adult, has become every American poet’s parent — she’s the mother and Walt Whitman the father of contemporary American poetry. She wrote almost two thousand poems, most of them unseen until a long time after her death, and virtually all of them of high quality. Why is she such a strong influence? We’ll look at a few of her poems, and I’ll talk a little about how she’s influenced my thinking and my poetry.”

Cammy’s first book of poems, Cathedral of Wish, received the 2006 Norma Farber First Book Award from the Poetry Society of America. Her second book, Inscriptions, came out in 2014. Both are published by Four Way Books. Her poems are forthcoming or have recently appeared in Ibbetson Street #40, The Missouri Review, The Maine Review, Off The Coast, Third Wednesday, and Spillway. A fellowship from the Ragdale Foundation helped her complete her new book. Cammy teaches literature and creative writing at Concord Academy.

Guests are invited to the social time and lunch, starting at 12:00 or just the program at 1:30. No reservations necessary.