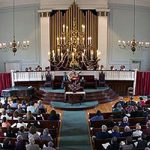 We often dream of creating a community where people across race and faith and neighborhood can build relationships and work together for a better world. But that is easier said than done. For white communities, the first step is reckoning with the reality of racism.

There will be Sunday school classes for Pre-K through Grade 8. The nursery will be open for babies and toddlers.

This Sunday the First Parish children’s choir, with soloists Adelle Cowen-Therieau and Lindsay Korn, will sing “It’s a Hard Knock Life” from the hit Broadway show “Annie.” The sanctuary choir will sing the poignant spiritual, “Turn Me Round,” with soloists Austin Burns and Julia Jaffee. The choir will also sing the powerful “Finale” from the Broadway show “Rent.” For the centering music, Rip Jackson will play Claude Debussy’s ethereal piano piece “Claire de Lune.” He will also play J. S. Bach’s energetic organ work “Prelude and Fugue in c minor, BWV 549” for the postlude.

Click here to listen to last week’s sermon by Rev. Anne Mason, “What on Earth Were We Thinking?”

The Rev. Mary Margaret Earl began serving as Executive Director and Senior Minister of the Unitarian Universalist Urban Ministry in 2014. During her time, she has worked to strengthen bonds between UUs and the Roxbury neighborhood where the UUUM operates. She is on the leadership team of the Moral Revival Massachusetts, working with a coalition reclaiming what it means to be religious in the public square.

Prior to her arrival at the UU Urban Ministry, she spent 10 years at McAuley Ministries, a faith-based nonprofit in Providence, RI that provides food, shelter, and clothing to those who were homeless or at risk of becoming so. She is past president of the Board of the Rhode Island Coalition for the Homeless and was recipient of the 2014 Heroes of Faith Award from the Rhode Island State Council of Churches for her interfaith work.