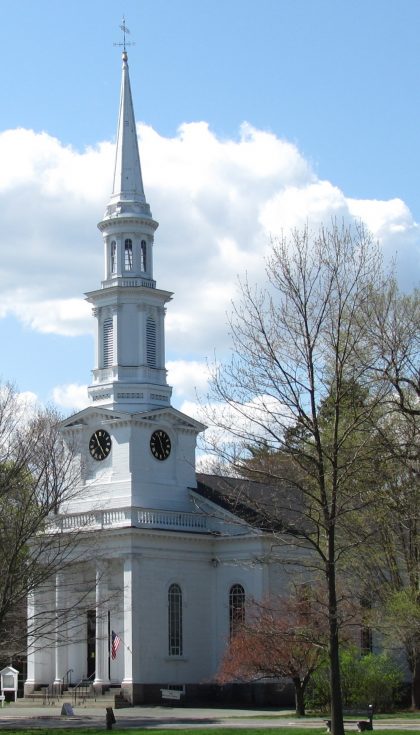 It’s exciting to see progress being made on this summer’s renovations to our lovely church. Beautiful, energy efficient windows have now been installed in Parker Hall and all of the other rooms on the east side of the lower level, replacing 10 badly deteriorated windows and sills. Two of the tall sanctuary windows (the ones facing toward the Battle Green) have been restored, although additional work will be done later this summer primarily on the small awning windows inset into them.

The first phase of renovating the women’s room on the lower level has now been completed, with the installation of new windows, new toilets, new partitions with grab bars, and new floor tile. Thanks to Bob Coughlin and Toni Tasker for replacing the old tile with new, a tough job carried out on ones’ knees.

Behind the green screening that covers the scaffolding, work has been completed on removing the flaking paint and rust-colored stains from the spire atop the steeple. Unexpectedly, several of the eight wood, scroll-shaped ornaments located just below the spire have substantial rot and others are deteriorating. Addressing this problem will add some time and expense to the project. The plan is to repair and repaint the steeple, the clock tower, and the front façade this summer, as well as paint the east side of Parish Hall where flaking paint has been removed. The scaffolding will then be taken down, most likely in August.

The sides of the church, including the six, tall sanctuary windows facing east and west will be repaired and painted at a later date, probably next summer, although work on this second phase might begin this fall. Stay tuned for future updates as work progresses this summer and possibly into the fall.