Faith is in short supply these days.  Is it ‘faith’ or is it ‘belief’ which brings us up short?  Gandhi wisely said “Faith is not something to grasp, it is a state to grow into.”
As we begin our new year together, let us take time to stop saying what we don’t believe, and wrestle with what we really do believe.

Music for this Sunday

This Sunday, Chelsea Cannon and Deborah Yardley Beers will be guest musicians along with Rip Jackson in presenting inspirational music for worship. Chelsea will sing Michael Masser and Linda Creed’s iconic “The Greatest Love of All” (made famous by Whitney Houston). Along with vocalist Rip Jackson, they will sing Mark Miller’s deeply moving “I Believe,” which is based on a poem etched into the wall of a concentration camp during the Holocaust. Deborah Yardley Beers will share beautiful piano music from her upcoming recitals. For the centering music and offertory, she will play Julia Perry’s lyrical “Prelude for Piano” and Montague Ring’s (aka Amanda Aldridge) passionate “Prayer Before Battle” (from Four Moorish Pictures). And for the postlude, she will play Dianne Goolkasian Rahbee’s festive “Novelette, Op. 37.” 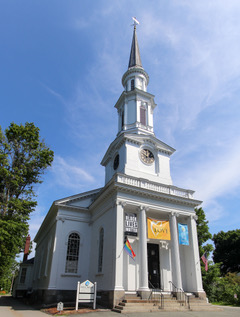